Born in the desert, raised in the woods, radicalized by Reagan's war on the poor. Today, my teaching and research focus on intersections of aesthetics and politics as well as Second Language Acquisition and literacy.

My current research interests are in the area of mass culture in Germany in the 20th and 21st centuries, particularly film. Of late, this has included integration of film into the foreign language classroom and the SLA environment.

"Articulating the Curriculum through Cultural Themes: A Literacy and Genre Approach to Teaching Protest, Rebellion and the Revaluation of the Past. Unterrichtspraxis/Teaching German. 45.1 (2012)

"Am Beispiel Anatomie: A Proficiency-Orietned Approach to Film for the Novice and Intermediate German Classroom." Unterrichtspraxis/Teaching German. 40.2 (2007) 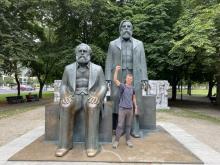