Gurney Norman was born in Grundy, Virginia in 1937. He grew up in the southern Appalachian Mountains and was raised alternately by his maternal grandparents in Southwest Virginia and his paternal grandparents in Eastern Kentucky in several towns, but primarily in the small community of Allais, near Hazard, in Perry County. He attended Stuart Robinson School in Letcher County, Kentucky, from 1946-1955. Norman attended the University of Kentucky from 1955-1959 graduating with a degree in journalism and English. In 1960, he received a Wallace Stegner Fellowship in Creative Writing at Stanford University where he studied with literary critic Malcolm Cowley and the Irish short story writer Frank O'Connor..

After Stanford, Norman spent two years in the U.S. Army. He returned to eastern Kentucky in 1963 to work as a reporter for his hometown newspaper, The Hazard Herald. Leaving newspaper work to concentrate on his fiction writing, Norman took a job with the U.S. Forest Service as a fire lookout in the Cascade Mountains of Oregon in the summers of 1966 and 1967. In 1971, his novel Divine Right's Trip was published in The Last Whole Earth Catalog and subsequently by the Dial Press and Bantam Books. Norman was one of the founders of the Briarpatch Network in 1974, with Richard Raymond and Michael Phillips. In 1977, his book of short stories Kinfolks, which received Berea College's Weatherford Award, was published by Gnomon Press.

In 1979, Norman joined the faculty of the University of Kentucky in the Department of English.  In 1996 his work as a fiction writer, filmmaker, and cultural advocate was honored at the Fifteenth Annual Emory and Henry College Literary Festival, which celebrates significant writers in the Appalachian region. In 2002 he was honored by the Eastern Kentucky Leadership Conference for outstanding contribution to the advancement of regional arts and culture. In 2007 the Appalachian Studies Association awarded Norman the Helen M. Lewis Community Service Award, which recognizes exemplary contributions to Appalachia through involvement with and service to its people and communities. He serves as Senior Writer-in-Residence at Hindman Settlement School's annual Appalachian Writers Workshop. Norman was selected to serve as the 2009-2010 Poet Laureate for the Commonwealth of Kentucky, and was officially installed as Laureate on April 24, 2009. On May 8, 2011, Norman was awarded an honorary Doctor of Humane Letters degree from Berea College.

Three short films, directed by Andrew Garrison, have been based on three of Professor Norman's short stories: 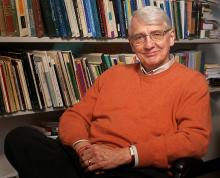