Debra Anderson received her MSN in community health nursing from Indiana University and a PhD in family nursing from Oregon Health Sciences University. Her dissertation, "Homeless Women: Their Perceptions About Their Families of Origin," was supported by a National Research Service Award. She received a postdoctoral fellowship (1996-98) from OHSU's NIH Institutional Training Grant, "Families in Health, Illness, and Nutrition."

Dr. Anderson expanded on her dissertation research with an AREA grant from the National Institute of Nursing Research, "Factors Influencing Homelessness in Women" (1998-2001). Her work in this field has been published in the Western Journal of Nursing; Journal of Obstetrics, Gynecologic, and Neonatal Nursing; and Public Health Nursing. Her study, "Violence and Stress Experienced by Female Long-Haul Truckers," focused on another vulnerable group of women. That work provided pilot data for an R01 study funded by the National Institute for Occupational Safety and Health on workplace violence among both male and female long-haul truckers (2002-2006). Her workplace violence research has resulted in six publications, several co-authored with doctoral students whom she mentored. A University of Kentucky funded study, "Workplace Violence and Women Residing in Battered Women Shelters" (2004-05), combined her two areas of interest, workplace violence and homeless women.
Dr. Anderson is a public health clinical nurse specialist. She is a member of the American Public Health Association, for which she served as chair of the Public Health Nursing section and is now a member of the Governing Council. In keeping with her role as a public health nurse, she is active in several community groups, including the Girl Scouts and middle and high school organizations. She has also been active in the University Senate, currently serving as its vice chair.
Dr. Anderson teaches courses in public health nursing, research, and leadership in the graduate and undergraduate programs. Her favorite role as an educator is mentoring students.
Research 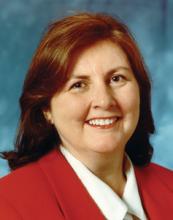