(Feb. 9, 2015) — Since the Deepwater Horizon disaster, also referred to as the BP oil spill, occurred in 2010, scientists have been searching for millions of gallons of unaccounted oil — 11 to 30 percent of the oil estimated to have been spilled — in the Gulf of Mexico. Kevin Yeager, University of Kentucky professor in the Department of Earth and Environmental Sciences, began his search that same year. After two major oceanographic cruises, and years of data collection and collaboration, Yeager and his research colleagues may have solved the mystery.

In a peer-reviewed manuscript co-authored by Yeager and others from the University of South Florida, Florida State University, University of Georgia and University of Southern Mississippi, led by oceanographer Jeffrey Chanton, the team estimates that 3 to 5 percent of the 4.1 to 4.6 million barrels of oil spilled sank to the seafloor. Their findings have been featured in national media such as CBS, NBC, Salon, USA Today, Washington Post and Time Magazine, and abroad in the Daily Mail and United Press International.

Using what is described as the “inverse” isotopic approach, the team was able to identify the presence of oil based on the absence of radiocarbon (14C).

Radiocarbon (14C) is constantly delivered to the Earth’s surface by the interaction of cosmic rays and atmospheric nitrogen. This form of carbon is then incorporated into living plants and animals. Once these plants or animals die, exchange with Earth’s atmosphere ends, and radiocarbon will decay with a half-life of 5,730 years, making it useful to date organic materials up to 50,000 years of age.

Since the Deepwater Horizon oil contains fossil carbon, millions of years old, it contains no radiocarbon. Yeager says that natural abundance radiocarbon measurements of surface sediment organic matter from the seafloor surrounding the oil spill site allowed them to identify how much carbon was derived from Deepwater Horizon oil settling to the seafloor, as opposed to carbon arriving there due to modern processes.

Serving as the chief scientist of two major oceanographic cruises in 2010 and 2011, Yeager began to sample the seafloor for evidence of the arrival and impact of Deepwater Horizon oil in the Gulf of Mexico. After these cruises, Yeager and his team shared samples and data with Chanton and his research group.

Following data collection, they began to collaborate on the paper published in the January edition of Environmental Science & Technology, "Using Natural Abundance Radiocarbon To Trace the Flux of Petrocarbon to the Seafloor Following the Deepwater Horizon Oil Spill."

Yeager says understanding how much of the Deepwater Horizon oil ended up on the seafloor, and where, is critically important for a number of reasons.

"Since this was not the first, and will not be the last, major oil spill in the world’s oceans, we need to understand how the oil behaves, and where it goes once it is introduced in large quantities to the marine environment" Yeager said. 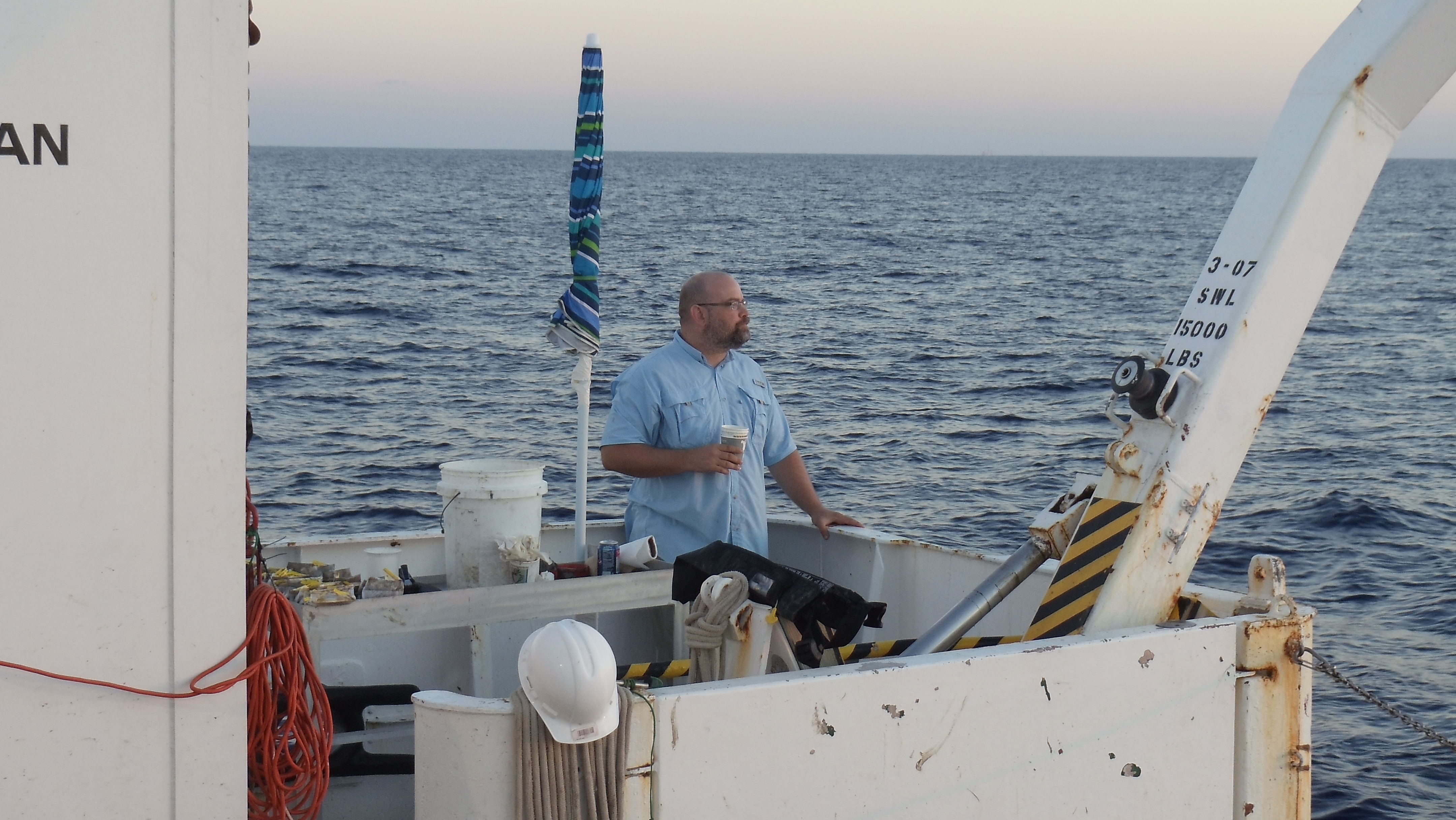 Once the oil arrives at the seafloor, the rate at which it can be naturally broken-down is slowed significantly, and in some cases, halted nearly entirely.

Relatively oil-rich sediments can be buried given enough time. However, this buried oil can be excavated and re-introduced to the water column (the area from the surface of water to the seafloor), or to surface sediments on the seafloor by a variety of processes, such as biological or physical mixing, the action of bottom currents, and the movement of sediment down slopes.

"As such, this oil can have long, and perhaps intermittent impacts on the environment," said Yeager.

Yeager, a sedimentary geologist and environmental radiochemist, directs the Sedimentary, Environmental and Radiochemical Research Laboratory (SER2L) at UK, which maintains state-of-the-art analytical instrumentation and comprehensive environmental field sampling equipment. SER2L graduate students joined Yeager on his second research cruise, and the lab has been involved with processing samples and producing data for the Deepwater Horizon work.

To learn more about Yeager's work, listen to a podcast produced by the Hive in the College of Arts and Sciences at http://www.as.uky.edu/podcasts/office-hours-kevin-yeager-and-julia-johnson.