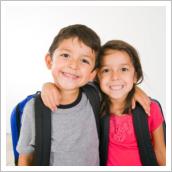 experiences of Latino immigrant children living in predominantly White communities. The study appears in a special section of the September/October 2012 issue of Child Development on children from immigrant families.

“This is important because feeling positively about their ethnicity was associated with children valuing school more, enjoying school more, feeling like they belonged at school more and getting better grades,” said Christia Spears Brown, associate professor in the UK Department of Psychology at the University of Kentucky, who led the study.

Teachers who valued diversity also seemed to establish classroom norms that discouraged peers from teasing others because of their ethnicity.

“Although schools can’t change their ethnic composition to make immigrant children feel less of a minority, they can show that they support multiculturalism, they can help teachers see the value of diversity and they can help their students feel positively about their ethnic group,” Brown said.

The study involved more than 200 third and fourth graders, primarily first- and second-generation immigrants from Mexico, in 19 U.S. elementary schools. They live in a community that is 81 percent European American and 14 percent African American, with a rapidly growing Latino population.

“Regions with previously small immigrant populations are now seeing rapid demographic changes, meaning that newly arriving children are entering school systems that have been, until recently, almost entirely European American and African American,” Brown said. “These children face unique challenges to their educational success, challenges that can in part be overcome through supportive teachers and schools.”

The Foundation for Child Development funded the study.