The Perpetual Quest for Efficiency and Stability in Earth Surface Systems

Fluxes of mass and energy in hydrological and geomorphological processes, and in environmental systems in general, preferentially select and reinforce the most efficient pathways. In doing so, they also tend to selectively preserve the most stable and resistant materials and structures, and remove the weaker and unstable ones. This suggests that Earth surface systems should generally evolve toward more efficient flux paths and networks, and a prevalence of stable and resistant forms. The purpose of this essay is to explore why the attractor condition of maximum efficiency and stability is not fully attained.

Numerous theories, hypotheses, and conceptual frameworks exist in geosciences that predict or seek to explain the development of flow paths in Earth surface systems (ESS). These include so-called “extremal” principles and the least action principle in hydrology and fluvial geomorphology, principles of preferential flow in hydrology, constructal theory, and various optimality principles in geophysics and ecology.

Introduction to New Maps Plus

Why New Maps Plus?

Read more about how New Maps Plus is unique: newmapsplus.uky.edu/all-about

Many biogeomorphic ecosystem engineer organisms exert their biogeomorphic effects through intrinsic activities and behaviors that occur wherever the organism occurs. Ants, earthworms, sphagnum mosses, and marsh grasses, for example are going to have the same qualitative ecosystem engineering impacts wherever they occur. In other cases, however, biogeomorphic impacts may differ (or even occur) in different geomorphic settings or habitats. This can be called contingent ecosystem engineering, because the effects are contingent on the environmental setting. For example, beavers build dams to create suitable pond habitats, with attendant geomorphic effects on streams. However, where water is deep enough (that is, there is suitable habitat without damming a stream), they don’t bother building dams or lodges (though they do have different biogeomorphic impacts, via burrowing into banks for their lodges). Thus the ecosystem engineering impacts are contingent on the hydrophysical properties of the stream. An example of an organism where the existence (not just the nature or degree) of biogeomorphic effects is contingent is the sulfate reducing bacterium Desulfovibrio desulfuricans. This microbe is found in soil, water, and living organisms in a wide variety of settings.

Where soils are relatively shallow, tree roots penetrate into the underlying bedrock through joints and fractures and promote weathering by funneling water into the rock, and facilitating chemical weathering. In addition to these processes, mass displacement by tree growth and bedrock "mining" by tree uprooting help deepen soils and regoliths. While this ihas been demonstrated in several studies, it was unclear the extent to which these processes occur where the bedrock is flat-bedded sedimentary rocks, which offter fewer vertically oriented joints for root access. Soil deepening by trees and the effects of parent material addresses this question (yes, the same general processes do occur in horizontally-bedded rocks). The paper, just out in Geomorphology (vol. 269, p. 1-7) by (mostly) Michael Shouse and myself, also provides some heretofore unprecedented spatial resolution on the spatial variability of soil & regolith thickness attributable to effects of individual trees. The abstract is below.

The University of Kentucky College of Arts and Scienceslast week hosted the Summer Institute in Economic Geography. With a 10-year history in supporting economic geography, the college and its Department of Geography welcomed young scholars from across the globe to Lexington. This is the first time the institute has returned to the U.S. since 2006 when it was hosted by the University of Wisconsin at Madison.

Complexity of Earth Surface System Evolutionary Pathways has just been published in "online first" form in Mathematical Geosciences. The abstract:

THE TAO OF THE RIVER

When more rain falls than the soil can absorb or plants can use, it has to go somewhere, and that movement is driven by gravity. Because concentrated flows are more efficient than sheet flows, concentrated and channelized flow paths are more likely to occur than diffuse flows. These pathways are also more likely to be reused, and to be enhanced by erosion associated with those flows. Similarly, when two of these threads of flow meet, they typically combine (less total surface area for the same amount of water = greater efficiency). Thus these channelized flows tend to form branching channel networks.

The formation of stream and river channels and networks is thus an emergent property of efficiency selection--those most efficient flow paths are more likely to arise in the first place and to be preserved and enhanced. The fact that most of these systems eventually lead to the sea (though globally, a surprisingly large minority drain to interior continental basins) is due to the fact that the flows are gravity driven, and for water, the ocean is the low point.

Just published in Earth-Science Reviews, and available via: http://www.sciencedirect.com/science/article/pii/S0012825216301143

I'm happy to have my name on this, and contributed enough to justfiy that, but this was not an equal contribution by all authors--Lukasz gets most of the credit! 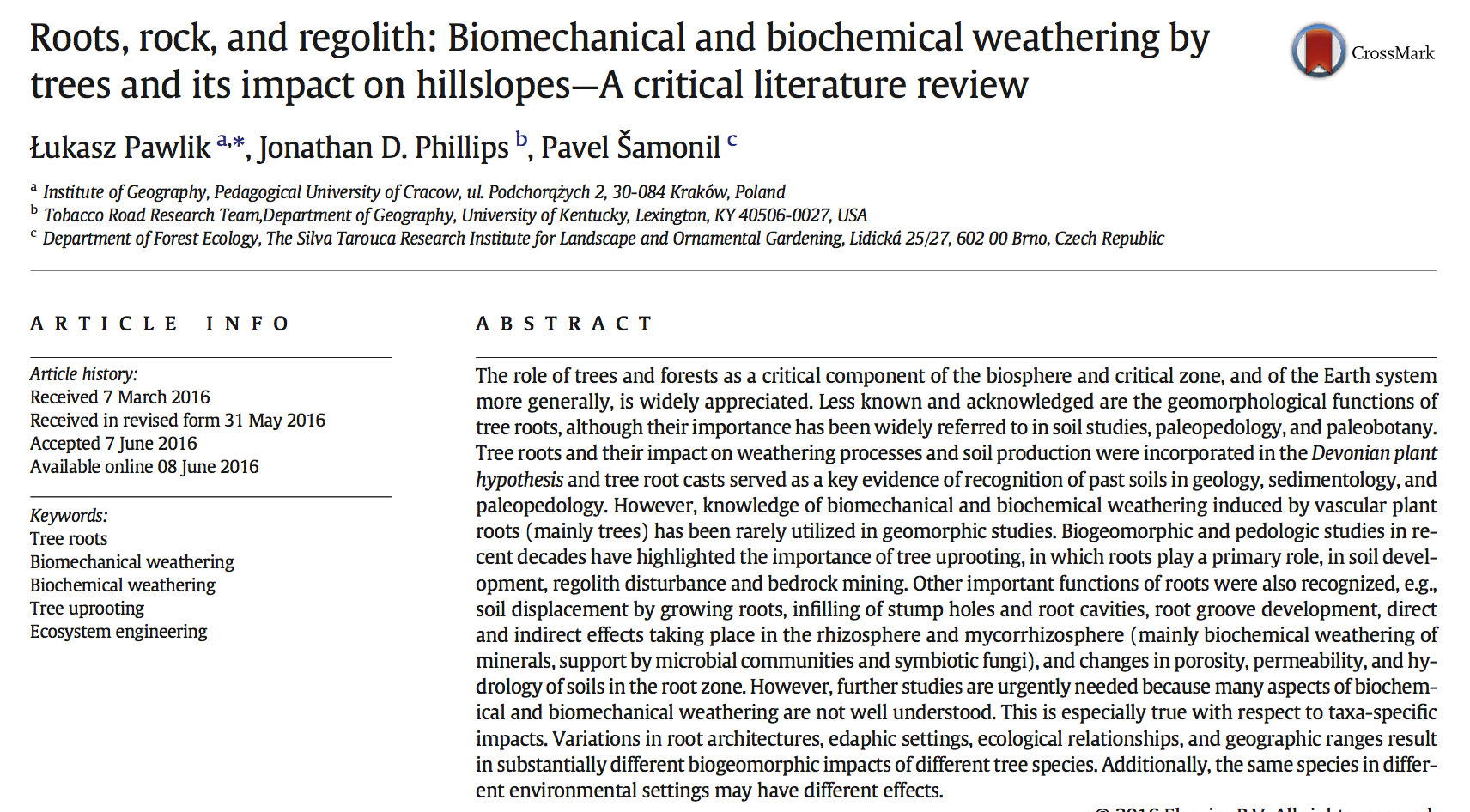 I've just spent a couple of excellent weeks working on a project investigating biogeomorphic impacts of trees, particularly in old-growth forests. With Pavel Samonil (Forest Ecology Dept., Sylva Tarouc Inst., Brno) and his PhD student Pavel Danek, we visited a number of sites in the Czech Republic. There is much to be done--some of the impacts we identified have never been studied before; others have been studied enough to reveal some complex questions and uncertainties. A sampling of what we saw follows. 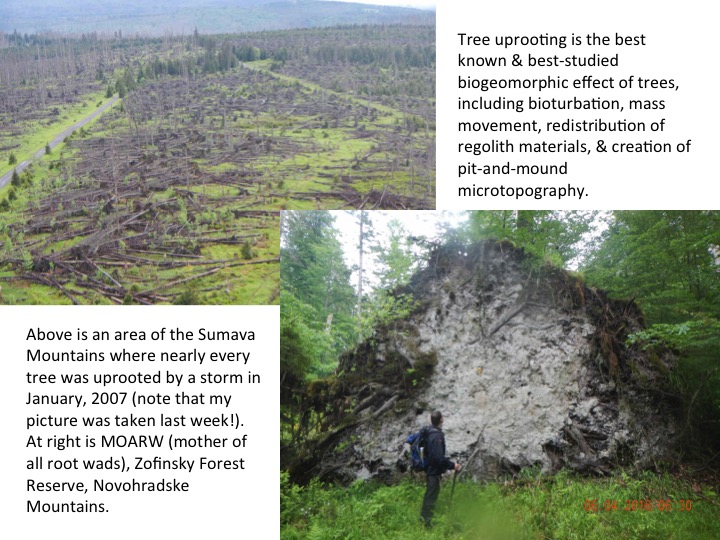 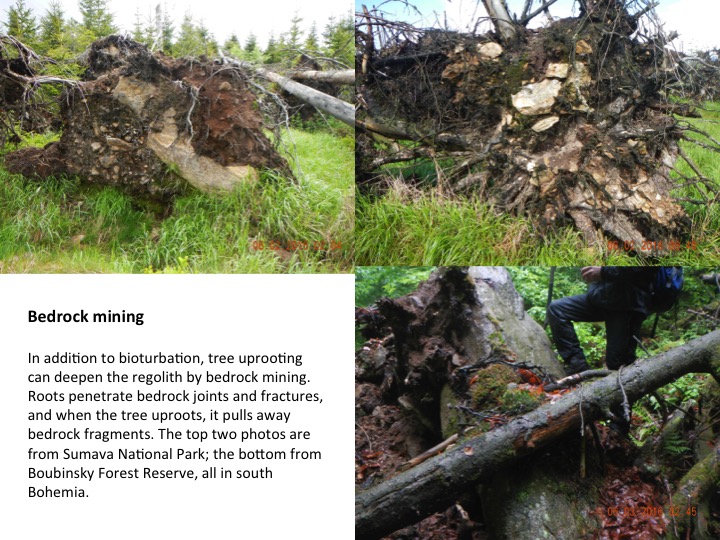 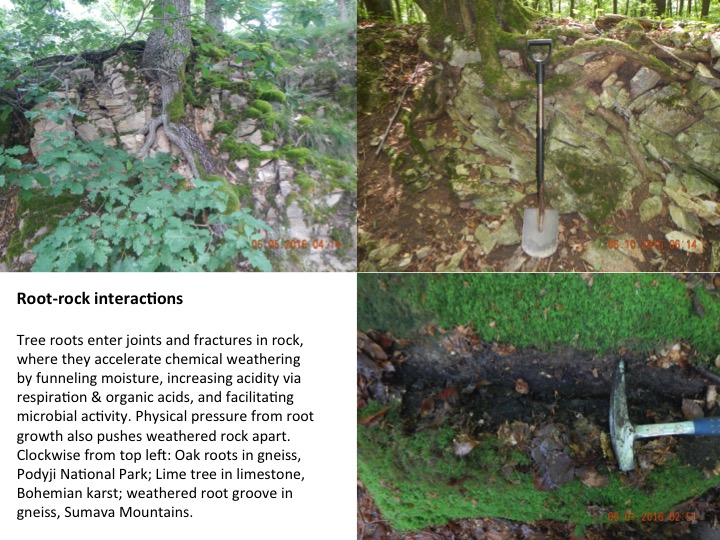 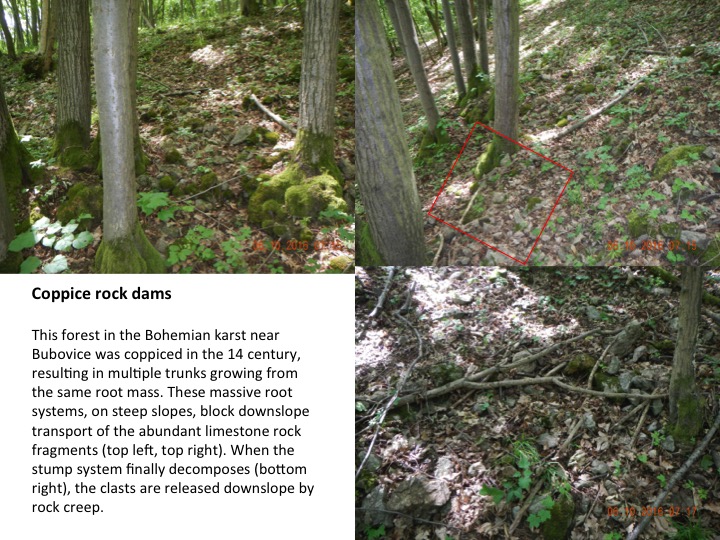 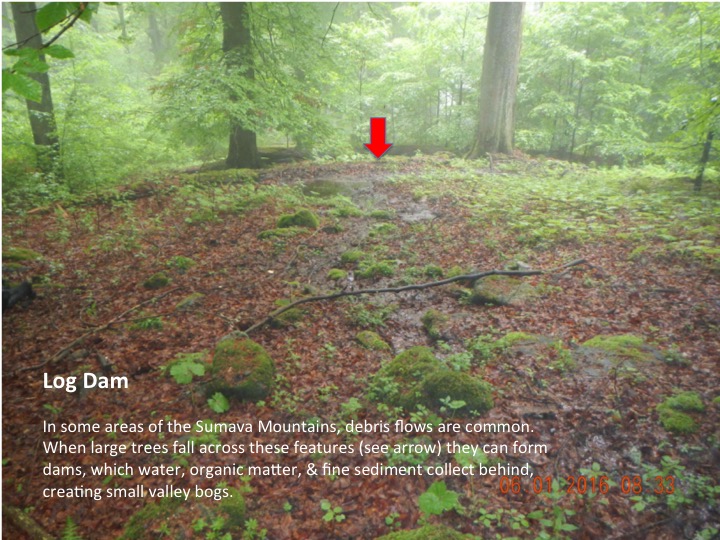 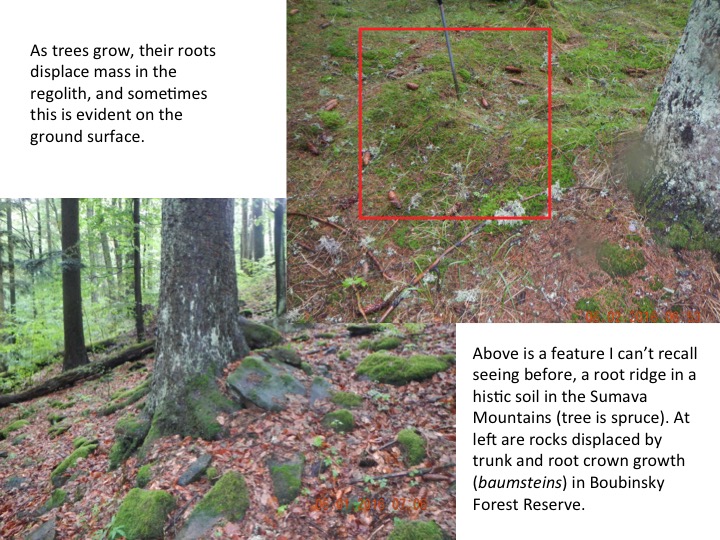 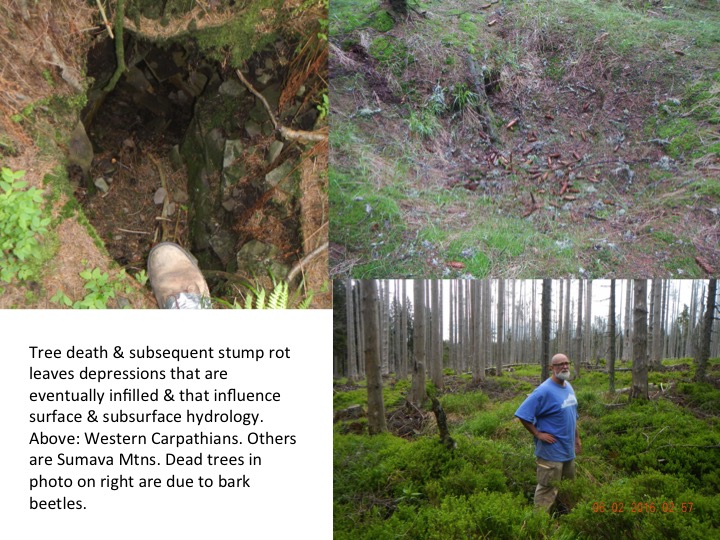 I’ve been working on and off on scale linkage problems for more than 30 years. The most recent effort, Vanishing Point: Scale Independence in Geomorphological Hierarchies, has just been published.

The abstract is below: