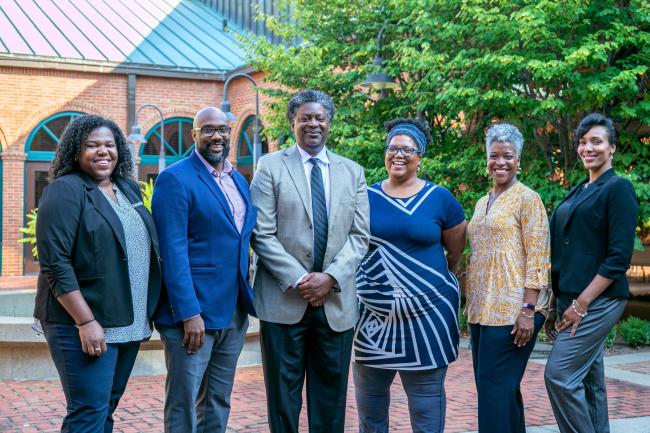 In an effort to build institutional excellence, an inclusive curriculum and faculty diversity, the University of Kentucky is welcoming six new educators to the College of Arts and Sciences.

Cluster hiring — hiring multiple scholars into one or more departments based on shared research interest — is a way to advance the university's commitment to diversity and inclusion, while also fostering a learning environment dedicated to collaboration and engagement.

"Not only does hiring multiple faculty members signal our commitment to African American and Africana Studies within the college, but it also creates a sense of possibility and energy for colleagues who are already here," Anastasia Curwood, director of African American and Africana Studies, said. "The fact that we have added a number of exciting scholars to our roster is an infusion of intellectual energy within the program."

Furthering the university's commitment to diversity and inclusion, students can now major in African American and Africana Studies (AAAS).

“The College of Arts and Sciences is striving to build a more inclusive curriculum across the humanities and social sciences,” Mark Kornbluh, dean of UK Arts and Sciences, explained. “The major in African American and Africana Studies is an important step in that process, but so too are the additional classes that these new faculty members will offer in their disciplines.”

Coursework in the AAAS program takes an in-depth look at the history and culture of black people and their descendants in Kentucky, the United States and around the globe. What students learn throughout the 39 credit-hour program could lead to career opportunities in business, education, communication, medicine, law and politics.

“Students who major and minor in AAAS will uncover the centrality of people of African descent to humanity, their centrality to the creation of the modern world and their present-day struggles and triumphs," Bertin M. Louis Jr., director of undergraduate studies for the AAAS program, said. "They will also develop critical thinking skills, contribute to the diversity of ideas at the University of Kentucky and offer solutions to the problems that challenge Black life. I couldn’t be more excited to be a part of this.”

The new faculty members, who are listed below, will teach core classes in anthropology, English, gender and women's studies, geography and history. In doing so, they are expected to have a large impact on students across various disciplines.

Nikki Brown is a professor in the Department of History and African American and Africana Studies. Her research explores the intellectual history of racism and representation in 20th century American media. Brown's book, "Private Politics and Public Voices: Black Women’s Activism from World War I to the New Deal," won the Letitia Woods Brown Award in 2006. Since winning a Fulbright Senior Lecturer Award in 2014, she has been working with the Afro-Turks — the descendants of enslaved people in the Ottoman Empire — on a series of memoirs, oral histories and photography projects.

Kamahra Ewing is an assistant professor in the Department of English and African American and Africana Studies, with an emphasis in postcolonial studies and film studies. Her research interests include African cultural productions, the African diaspora, Global South cultural flows, democracy, immigration, media studies, public policy and religion. Ewing is working on projects that examine Nollywood audience reception within African immigrant and Black Atlantic communities in Brazil, Jamaica and the United Kingdom.

Frances Henderson is a professor in Gender and Women's Studies and African American and Africana Studies. Her research interests center around intersectionality as it occurs in black political thought, black feminist theory and social movements in the diaspora. Henderson is developing a manuscript that examines the ways in which African Americans in the rural South manifest anti-racist movements. The manuscript highlights the successes and struggles of the organization inspired by the #BlackLivesMatter movement. Most notably, her research places intersectionality at its center, in an examination of the ways in which gender, race, class and region shape the use of religion in social justice movements.

Bertin M. Louis Jr., is an associate professor in the Department of Anthropology and African American and Africana Studies. He also serves as the director of undergraduate studies for the AAAS program. Louis' research interests are in the African diaspora, Africana studies, religion (Haitian Protestantism), race and racism, human rights, statelessness and antiracist movements. He studies the growth of Protestant forms of Christianity among Haitians transnationally, which is featured in his New York University Press book, “My Soul is in Haiti: Protestantism in the Haitian Diaspora of the Bahamas.” The book was a finalist for the 2015 Haitian Studies Association Book Prize in the Social Sciences. Louis is the president-elect of the Association of Black Anthropologists (2019-2011), a 2013 Southeastern Conference (SEC) Travel Grant Award recipient and a 2012 American Anthropological Association (AAA) Leadership Fellow.

Derrick White is a professor in the Department of History and African American and Africana Studies, with an emphasis on African American organizational life. His research examines how black-led organizations wrestled with the successes of the civil rights movement. White has authored two books, "The Challenge of Blackness: The Institute of the Black World and Political Activism in the 1970s" (2011), and "Blood, Sweat, and Tears: Jake Gaither, Florida A&M, and the History of Black College Football" (2019). His current research tells the story of a man who escaped a lynching in North Carolina by fleeing to Canada and its impact on the Dyer Anti-Lynching Bill in 1922.

"The individuals that we have hired are incredibly diverse in their training, research and experience. But what unifies them is a commitment to telling the stories of people of African descent and sharing their meanings with our students," Curwood said. "Together, with our existing faculty, we now have an incredibly strong roster of teacher-scholars who will keep building the program for years to come."

“It is important to recognize that this is the first year of a multi-year commitment,” Kornbluh added. "For 2019-20, UK Arts and Science will be joined in the cluster search by the College of Education, the College of Fine Arts and the Gatton College of Business and Economics. The ultimate goal is both inclusiveness across the entire university curriculum and a much more diverse faculty.”

To learn more, you can visit the AAAS website.

The University of Kentucky is increasingly the first choice for students, faculty and staff to pursue their passions and their professional goals. In the last two years, Forbes has named UK among the best employers for diversity and INSIGHT into Diversity recognized us as a Diversity Champion two years running. UK is ranked among the top 30 campuses in the nation for LGBTQ* inclusion and safety. The Chronicle of Higher Education judged us a “Great College to Work for,”  and UK is among only 22 universities in the country on Forbes' list of "America's Best Employers."  We are ranked among the top 10 percent of public institutions for research expenditures — a tangible symbol of our breadth and depth as a university focused on discovery that changes lives and communities. And our patients know and appreciate the fact that UK HealthCare has been named the state’s top hospital for three straight years. Accolades and honors are great. But they are more important for what they represent: the idea that creating a community of belonging and commitment to excellence is how we honor our mission to be not simply the University of Kentucky, but the University for Kentucky.