Daniel R. Reedy is Professor Emeritus of Spanish in the Department of Hispanic Studies (formerly Spanish and Italian) and Dean Emeritus of The Graduate School at the University of Kentucky.  He received the B.S. in Ed. (Spanish, English, Latin), with Honors, from Eastern Illinois University (1957), and the M.A. (1959, Spanish) and Ph.D. (1962, Spanish, Linguistics, Latin American History) from the University of Illinois at Urbana-Champaign.  He also pursued pre-doctoral studies at the Universidad Nacional Mayor de San Marcos in Lima, Peru (1959-60).

He began his professional teaching career at the University of North Carolina—Chapel Hill in 1962 (Instructor, Assistant, Associate Professor).  At the University of Kentucky since 1967, he was promoted to the rank of Professor in 1970.  His fields of specialization included several areas of Spanish American Literature:  the Colonial Period, Twentieth-century Novel and Poetry, and the Short Story with emphasis on Peruvian literature and culture.  Reedy’s research and publications paralleled his teaching interests.  At the graduate level, he directed (or co-directed) forty-five doctoral students to the completion of their degrees.  He retired from the University of Kentucky in June of 2001.

In the Department of Spanish and Italian, Reedy served as Director of Undergraduate Studies (1967-71), Director of Graduate Studies (1971-75), and Department Chair (1976-83).  At the University level, his administrative positions included Acting Dean of Undergraduate Studies (1973-74), Associate Dean for Academic Affairs (1983-88) and Dean of The Graduate School (1988-96).  He was a member of the University Senate on several occasions, the Senate Council (1978-80), the Board of Directors of Spindletop Hall (1971-72), the UK Athletics Association Board (1973-91), the Board of Directors of the Hilary J. Boone Faculty Center (President, 1986-88), the University Press of Kentucky Committee and Board since 1976, the University of Kentucky Board of Trustees (1997-2001, Secretary 2000-01), Senior University Marshal (1979-89), and chair or member of numerous college and university committees, including the Institutional Task Force on Research and Graduate Education (1997).

Reedy is a member of Phi Beta Kappa, Sigma Tau Delta, Kappa Delta Pi, and Omicron Delta Kappa.  He was the recipient of a Rotary International Fellowship, a Fulbright Research Fellowship, a Social Sciences Research Council Award, and an American Council on Education Fellowship in Academic Administration.  He has been a Corresponding Member of the Hispanic Society of America since 1979; other recognitions and awards include the UK William B. Sturgill Award for Outstanding Contributions to Graduate Education (1979); Honorary Doctor of Humane Letters from Eastern Illinois University (1981); Achievement Award for Outstanding Contributions to Graduate Education from the Conference of Southern Graduate Schools (1999); William E. Lyons Award for Outstanding Academic and Public Service (2001) from the UK Martin School of Public Administration; University of Illinois College of Liberal Arts and Sciences’ Distinguished Alumnus Award (2001); and the University of Kentucky College of Arts and Sciences’ Faculty Hall of Fame (2017). 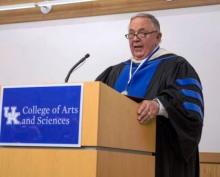