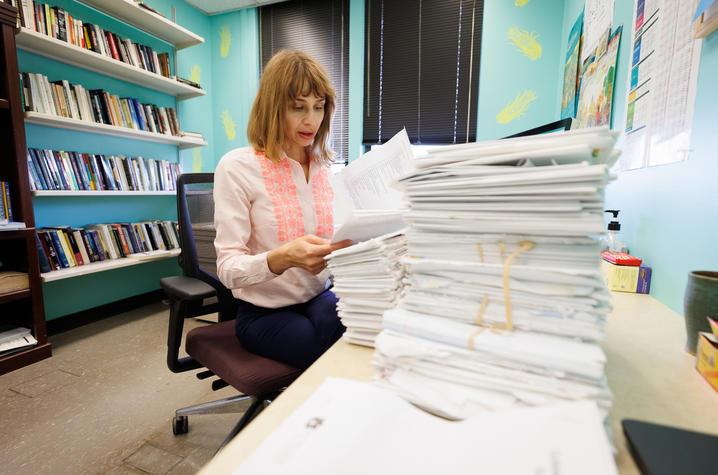 LEXINGTON, Ky. (Oct. 5, 2022) — Fruithurst is your quintessential small town. Located in Cleburne County, Alabama — just five miles on the other side of the Georgia state line — only a few hundred people call it home.

Christy Hiett is one of those people.

Born and raised in the tight-knit community, she now serves as principal of Fruithurst Elementary, the same school she attended as a young girl.

That’s why Hiett became concerned when a growing number of people, including her students, were diagnosed with cancer.

“When children started being diagnosed with leukemia, people in the community looked to me for answers,” she said. “I became passionate about this issue because it was impacting children, and children are my passion. This tugged at my heart greatly.”

“I’m a person that wants answers to our problems, and I typically take the lead in finding those answers — not waiting on someone else to do things for me. Therefore, I started researching.”

But this was a major undertaking, and Hiett couldn’t do it alone. At her urging, an interdisciplinary team of geoscientists and sociologists from the University of Kentucky, the University of Alabama and Auburn University began collaborating to learn more about the possible cause behind the high cancer prevalence rates in Cleburne and the neighboring community of Muscadine, Alabama.

“Communities are gatekeepers of the most important knowledge to take on cancer clusters,” said Loka Ashwood, associate professor in the Department of Sociology in the UK College of Arts and Sciences. “They can and should be incorporated into research.”

“As a scientist, I am driven by the service to society. My research group uses science to inform society about environmental issues,” said Natasha Dimova, a hydrogeologist with expertise in radioactivity from the University of Alabama. “This project had a direct connection to a vexing social and health problem, and we were grateful to provide data to help understand the scope of the issue.”

Through a study titled, “Rural and Community-Based Cancer Cluster Research,” the team launched a communitywide project. Together, they conducted surveys, and through that research, they learned prevalence rates for 16 types of cancer in the Fruithurst Elementary School District were higher than national rates — particularly for melanoma (6.7 times the national average) and lung cancer (9.2 times the national average).

“We identified a relationship between pesticide exposure and the drinking of well water as statistically significant in a model of environmental exposures,” Ashwood explained. “Our rapid response water and soil samples also uncovered contaminants.”

According to the study, the wells showed higher than acceptable levels of heavy metals and semivolatile organic compounds linked to cancer. The contaminants also included an industrial chemical, Bis(2-ethylhexyl) phthalate, at levels that exceeded federal limits for municipal water systems.

“Residents have been able to pursue direct action, such as the installation of reverse osmosis systems to reduce exposure,” Ashwood said. “Cleburne Cancer Concerns is also advocating that county commissioners end spraying the herbicide MSMA Target 6 Plus on roadsides.”

“Working on this project has helped me understand how community-based participatory research actually works in practice and what outcomes are possible when researchers and community members draw on their knowledge and skills for social and environmental change,” said KC Vick, a doctoral student in the UK Department of Sociology.

A paper on the research was recently published in Environmental Justice.

Now, the community of Cleburne is equipped with the data needed to tackle this challenge and bring about change.

“I could not have accomplished anything related to the cancer research if it had not been for the researchers with whom I collaborated. I desperately tried to find answers on my own prior to meeting Dr. Ashwood, but I was met with roadblock after roadblock,” Hiett said. “I am forever grateful for the help I received and for the help we were able to provide for my community.”

The University of Kentucky is increasingly the first choice for students, faculty and staff to pursue their passions and their professional goals. In the last two years, Forbes has named UK among the best employers for diversity, and INSIGHT into Diversity recognized us as a Diversity Champion four years running. UK is ranked among the top 30 campuses in the nation for LGBTQ* inclusion and safety. UK has been judged a “Great College to Work for" three years in a row, and UK is among only 22 universities in the country on Forbes' list of "America's Best Employers."  We are ranked among the top 10 percent of public institutions for research expenditures — a tangible symbol of our breadth and depth as a university focused on discovery that changes lives and communities. And our patients know and appreciate the fact that UK HealthCare has been named the state’s top hospital for five straight years. Accolades and honors are great. But they are more important for what they represent: the idea that creating a community of belonging and commitment to excellence is how we honor our mission to be not simply the University of Kentucky, but the University for Kentucky.