Article update: "I am glad to share with you a study published in the journal Quaternary Science Reviews that I co-authored with an international team of human evolutionary scientists and archaeologists, including lead author Amélie Beaudet from the Department of Archaeology, University of Cambridge (United Kingdom). The study uses modern virtual techniques to study the anatomy of a fossil discovered more than half a century ago in South Africa. We consider this fossil to be crucial for understanding the behavioral and anatomical evolution of our species, although further work is necessary to properly date and contextualize competing chronostratigraphic scenarios. Such further inter-disciplinary work is on-going, including work from my lab involving one of our master students (Marcus Rodriguez). More of this kind of work will be made possible with instrumentation to be acquired by EduceLab." -- Hugo Reyes-Centeno 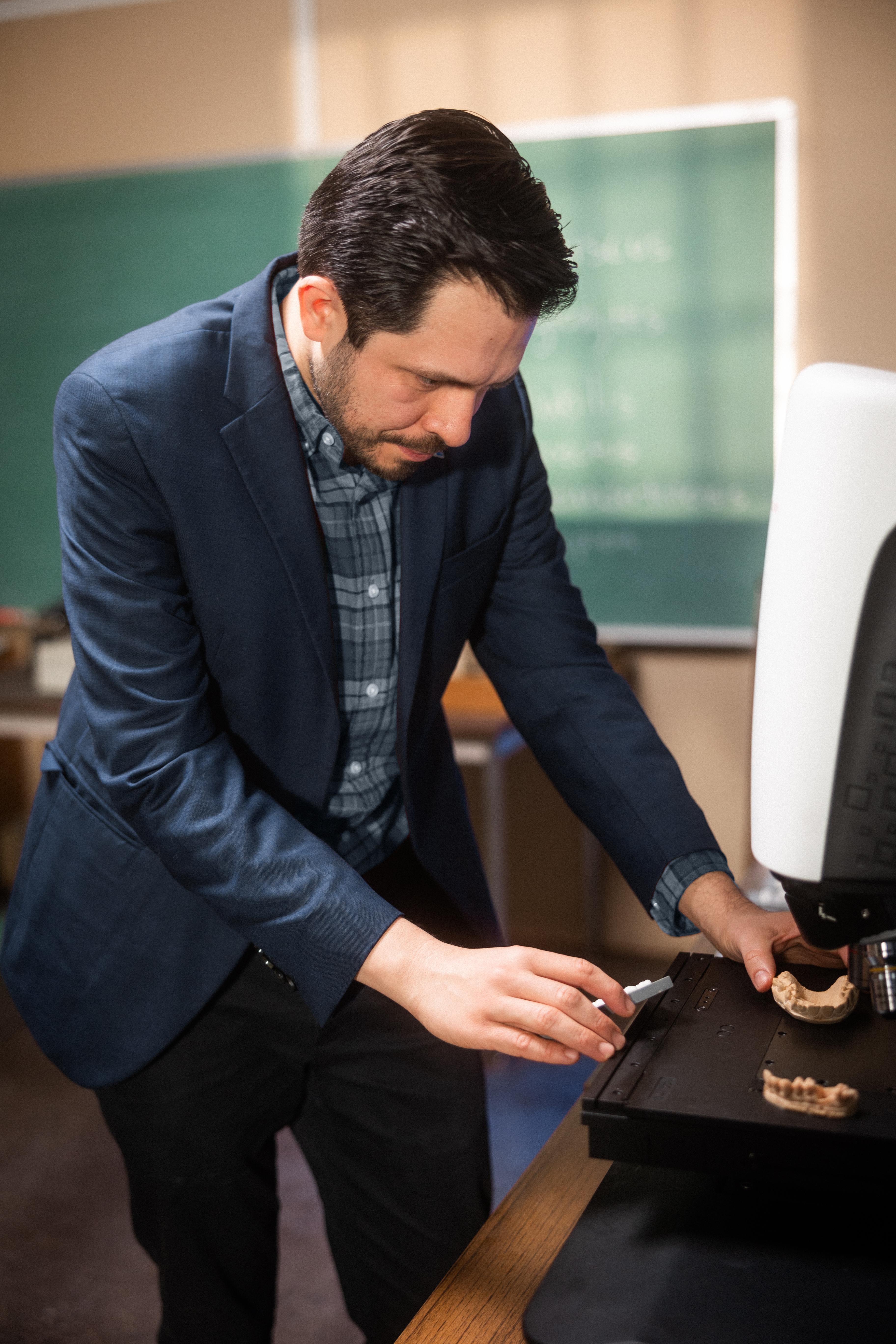 Hugo Reyes-Centeno has sunk his teeth into a fascinating, multidisciplinary approach to the study of human evolution at the University of Kentucky. That approach involves (yes) teeth—and crania.

Reyes-Centeno joined the Anthropology Department as an assistant professor in 2020. He’s among the UK faculty who will be using instrumentation bought and upgraded with a recent $14 million infrastructure grant from the National Science Foundation for noninvasive research on human artifacts and remains in a blossoming heritage science lab, called EduceLab.

Part of Reyes-Centeno’s physical anthropology research involves examining remains of the human body—skulls and teeth—to find telltale differences that separate human species and living populations. For example, he’s beginning research using micro-computed tomography (micro-CT), a system that allows researchers to build a model of the insides of an object without destroying it. Reyes-Centeno and his students are using it to investigate the inner ears (cochlea) of the crania belonging to early humans and human-related species. A micro-CT system can give researchers a minute look at the cochlea’s structure for detailed comparisons.

“I have some students looking at the inner ear cavity,” he said. “That’s the part that you might see in your doctor’s office that has this very swirly-like configuration. It’s actually not a bone structure, but there’s bone surrounding this snail-like chamber that has important functional applications for hearing and maintaining balance.”

He and the students are looking at these structures to determine how different they are among fossilized remains of different human species, such as Neanderthals, so that in the future they can be used to identify the origins of the subject.

“One of the things that we’re looking at is to see whether we can use this method to understand differences in sex and ontogeny, different age groups, and differences between geographical populations,” he said.

Teeth also can be studied in this method and with other resources. A paper he wrote with colleague Hannes Rathmann explores how anthropologists can trace the origins and diversity of humans using specific characteristics of teeth. For example, the incisors of Native Americans today frequently have a “shoveled,” or curved, back side of their front teeth. The incisors of people with European ancestry typically have flat backs.

“Incisors are the front two teeth you see when you smile, particularly the first two teeth,” said Reyes-Centeno, who earned his doctorate at the University of Tübingen in Germany. “We know that Native Americans have shoveled teeth, in some populations at almost a 100% frequency. So, if you take a person with Native American ancestry, they’re quite likely to have that kind of trait.”

Reyes-Centeno’s paper, “Testing the utility of dental morphological trait combinations for inferring human neutral genetic variation,” goes on to suggest that this shoveling of Native American teeth may not be just the result of genetic drift; the trait may have developed as an evolutionary adaptation to the environment of Native Americans.

“We wanted to know if this was something that came about by chance—what we refer to as genetic drift in evolutionary studies—or whether it was something that was selected for or if it had some purpose,”’ he said. “Perhaps it’s an advantage for people who are chewing a lot more with their front teeth than with their back teeth. That wasn’t something we were able to address specifically, but what we were able to say is that there probably are some kinds of selective pressures going on for that particular trait. It may not be directly selecting for those teeth, but it may be selecting some other phenotype—a larger mouth in general, for example—that results in teeth with that particular shape.”

And looking at such traits as “shoveled” incisors can also help physical anthropologists determine the geographical origin of a fossilized human or unidentified deceased individuals. For example, traits involving a “mesial ridge” in the upper canines indicate African ancestry.

“In most sub-Saharan Africans today, you will find this trait, whereas in non-African populations you do not,” he said. “This trait is tremendously useful in identifying where someone comes from. Why is that the case? Well right away we can say with some level of certainty whether they’re African or non-African. So it is one of the traits that we found could be very useful for identifying geographical origin. The more important finding of our study, however, is that using combinations of multiple traits will allow for a more precise identification.”

Reyes-Centeno is taking advantage of the interdisciplinary and collaborative strengths of UK.  He and Brent Seales, Department of Computer Science chair in the College of Engineering, received a grant from the Vice President for Research Office to bring in a micro-computed tomography system for an extremely close look at teeth—and other things, which is part of the EduceLab.

“That system will allow us to work on very small details in teeth, which is what I’m interested in, but other small bones as well,” he said. “And Brent will be looking at antique books and scrolls. We’re quite excited about that.”

As a biological anthropologist, Reyes-Centeno is probing some of the basic questions about why humans have evolved a myriad of differences over the course of about 1 million years.

“I take an approach that looks at the diversity we see in populations today,” he said. “I’m interested in understanding why we have that diversity. And that’s what got me interested in studying anthropology in general.”

Reyes-Centeno was born in Mexico and raised in California. In his freshman year at Bard College at Simon’s Rock in Massachusetts, he discovered a passion for biological anthropology. He transferred to Stanford, where he majored in anthropology, and went on to earn a master’s at the University of Ferrara in Italy and finally a doctorate in archaeology in Germany.

In his previous work at Tübingen, Reyes-Centeno developed a strong multidisciplinary approach to the study of human origins. As he was finishing his doctorate in 2015, he and one of his supervisors developed a broad-based center for the study of the human past.

“We wanted to have a center for an initiative that would bring multiple disciplines together to answer common questions,” he said. “We came from what’s called the four-field approach to anthropology, which involves evolutionary biology, archaeology, social and cultural anthropology, and linguistics. We wanted to bring that approach to the University of Tübingen.”

Reyes-Centeno and his colleagues received funding from the German government and the German Research Foundation, and as a result he found himself with a center and a job.

“I became the scientific coordinator for the center for the next five years,” he said. “That meant being in charge of developing the center, planning courses, hiring people and managing all of the scientific projects.”

Reyes-Centeno is eager to expand his collaborative efforts in his position at UK as well as to spread the word about human origins in the context of a liberal arts education.

“This semester I will be teaching Human Evolution and Modern Human Origins,” he said. “I hope Human Evolution will lead to a lot of interest across campus—not just for anthropology students, but also biology students. The class potentially will interest pre-med and pre-dental science students as well.”&